Australian-born NBA star Ben Simmons hit the court in Charlotte with a special message on his Nike Hyperdunk X - "EGG BOY" was scrawled on his yellow kicks as a tribute to the Australian teenager who smashed an egg on senator Fraser Anning's head. 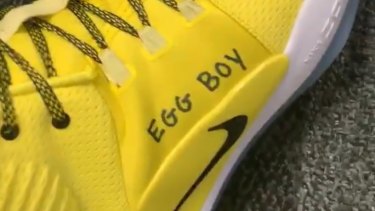 For those who missed it, Anning was incredibly disrespectful after the mass shooting in Christchurch, and "Egg Boy" lay one on him.

Someone has just slapped an egg on the back of Australian Senator Fraser Anning's head, who immediately turned around and punched him in the face. @politicsabc @abcnews pic.twitter.com/HkDZe2rn0X

From one Aussie legend to another, here's hoping the pair get to meet.